Hamburg sets out to become a Global Active City 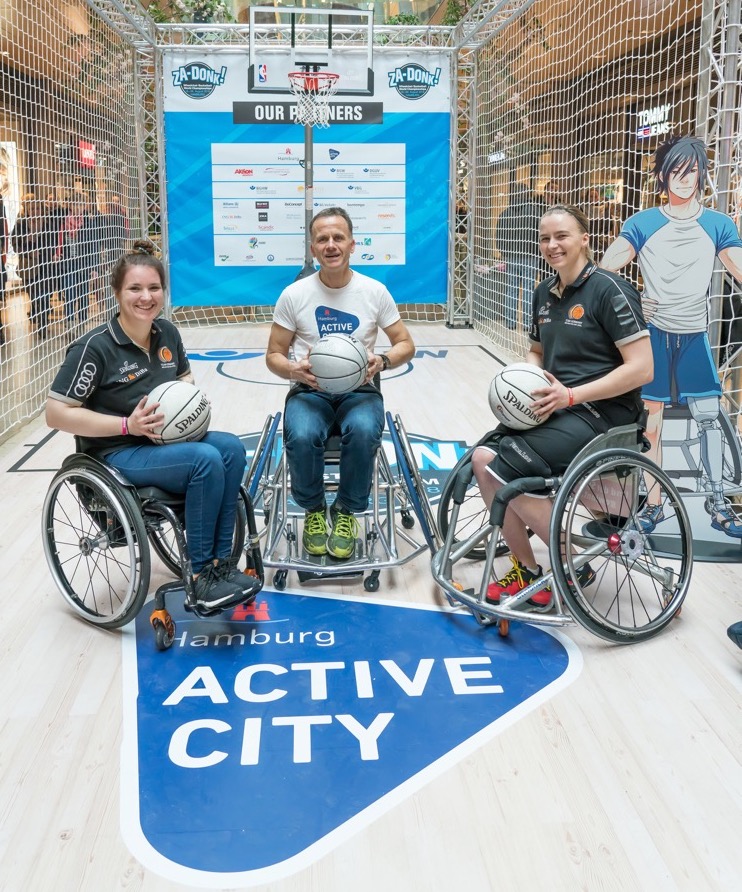 Wheelchair basketballers Maya Lindholm (left) and Mareike Miller, who both play for Germany, with Christoph Holstein, Hamburg State Councillor for the Department of Home Affairs and Sports. The World Wheelchair Championships will take place in Hamburg from 16 to 26 August 2018. Photograph by Witters GmbH.

One of Germany’s sportiest cities has joined a worldwide network of places trying to encourage their residents to be more physically active.

The Active Well-being Initiative (AWI) is delighted to welcome Hamburg among its growing number of partner cities. Hamburg is aiming to achieve full Global Active City status by the end of the year. Christoph Holstein, Hamburg State Councillor for the Department of Home Affairs and Sports, who attended an AWI workshop in Liverpool, UK earlier this year, said: “The cities around the world are facing the same challenges, caused by urbanisation. We want to let other cities learn from our experience – and most important: we want to learn from others too, like we did for example from Liverpool so far. We are thankful and proud having the opportunity to apply for being a Global Active City.”

Hamburg, with a population of 1.8 million people, is Germany’s second largest city. Research published in 2010 revealed that it had the most active sports population in all major cities in Germany. Eighty percent of people were active in sports, with more than 130 sports and types of exercise practised. The most popular activities were running, fitness, cycling and swimming. Unlike in most other German cities, women were just as active in sports as men, and older people were also very active.

Around one third of the city’s residents belong to a sports club. There are 817 sports clubs and 54 sports associations, with a total of 578,000 members – a figure that has risen by about 15 percent in the past ten years. Hamburg’s active city strategy was written when it was competing to host the 2024 Olympic and Paralympic Games. It withdrew its bid after a public referendum, and the strategy has been adapted to integrate the positive effects of the Olympic competition to strengthen and promote sport.

Mr Holstein said: “Active City Hamburg is a sports development strategy based on the image of a city that is active and in motion; where people are enthusiastic about sport and get involved; where sport is present and tangible. Our active city strategy also means offering opportunities for sport everywhere in our city. It means that it must be easy to do sport and be active.

“Therefore public spaces – streets, parks, green areas, rivers and lakes – have to be used for sport more than before. And wherever urban development is planned, it means taking account of the need for sports facilities and the wishes of physically active people at an early stage.”

Cities, regions or towns of any size or activity level can sign up to the Global Active City programme. Benefits include being part of a group to share good practices.