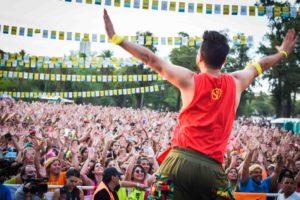 Zumbathon in Buenos Aires, one of the AWI’s ten pilot cities.

Cities across the world are being urged to sign up to the Global Active City programme, a new health and physical activity promotion scheme that is proven to increase individual and collective well-being among the world’s growing urban population. With many more to come, ten pilot cities are currently testing the Global Active City model and show significant improvements in sports participation and public health outcomes. The scheme is now being rolled out worldwide, with all cities invited to join the initiative and eventually to become a Global Active City.

The project was announced today (Tuesday, 3 October 2017) by the Active Well-being Initiative (AWI), at the Smart Cities & Sport Summit organised by the World Union of Olympic Cities in Montréal. “Decision-making is often faster in cities than at national or international levels,” explained Gabriel Messmer, president of Evaleo, one of the NGOs which founded the AWI. “Thus, delivering tangible behavioural changes to the lives of an ever-growing number of city dwellers can be more effective if managed at a city, neighbourhood or even school and club level.”

According to Wolfgang Baumann, Secretary General of TAFISA, the AWI’s other founding organisation: “Cities are in need of a framework, access to best practices and the capacity to share and learn from each other. They often face the same challenges regarding urbanisation and inactivity, even though they all have various constraints, contexts and resources to deal with. We try to assist and guide them as best as we can for the well-being of their population.”

The International Olympic Committee (IOC) has supported the AWI since the early days of its development in 2013. For Marie Sallois Dembreville, IOC Director of Corporate Development, Brand and Sustainability, cities have a new, pragmatic way to enhance the quality of life of their citizens, and particularly their youth: “The Active Well-being Initiative is a powerful solution for cities to promote active and healthy living. It clearly demonstrates a city’s achievements in creating lasting social benefits through sports. We welcome this initiative that perfectly fits with the recent IOC legacy approach.”

Luis Gustavo Lobo, Olympian in tennis and now Undersecretary of Sports for the City of Buenos Aires, said: “Working with the AWI as one of the pilot cities helped us to better structure our approach and to focus on key priorities. It also opened new forms of collaboration between city departments and experts who rarely work together. We now have a new momentum to tackle some of the pressing needs of our youth population.”

John Marsden, former Head of Liverpool Active City, has been seconded by Liverpool City Council to Liverpool John Moores University (LJMU) and the AWI to share his knowledge and experience with other cities. He said: “The City of Liverpool is delighted to be an advisory city for the AWI. We launched our first Active City model in 2005 and have enjoyed numerous benefits from its joined-up approach. When we started, fewer than one person in five exercised for at least 30 minutes, three times a week. We have seen such dramatic changes that our new target is to become the most active city in England by 2021. We are excited to have the opportunity to share our experiences with other cities who may be starting out in creating their own model. Through cities coming together, we can reverse the trend globally and turn city dwellers into more active, healthy and happy citizens.”