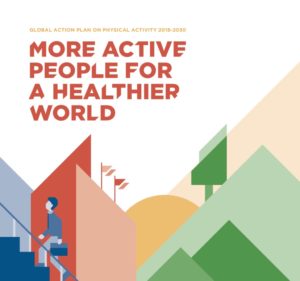 The World Health Organization stressed the vital role for cities in GAPPA – its new worldwide strategy to promote physical activity. The Global Action Plan on Physical Activity 2018-30 recommended active city networks such as the Global Active City programme as part of its mission to “create active people”.

Action 3.6 called for member states to implement “whole-of-community initiatives, at the city, town or community levels, … to promote increased participation in physical activity and reduced sedentary behavior by people of all ages and diverse abilities, focusing on grassroots community engagement, co-development and ownership.”

The AWI made a written submission in response to the first draft of the action plan. We advised WHO to elevate the importance of cities, municipalities, and stakeholder partnerships, and to recommend that partnerships and governments involve inactive people in the planning of projects to increase activity levels. All these elements were included in the final draft.

As he launched the plan, WHO Director General Dr Tedros Adhanom Ghebreyesus called for cities to encourage physical activity. He said: “Being active is critical for health. But in our modern world, this is becoming more and more of a challenge,  largely because  our cities and communities aren’t designed in the right ways. We need leaders at all levels to help people to take the healthier step. This works best at city level, where most responsibility lies for creating healthier spaces.”

See page 86 of GAPPA for the full recommendations relating to active cities.